Is it ok to go behind an agent's back after they show you a property?

So yesterday one of our agents sent me a screenshot of a post in a group from an anonymous person asking for advice, whether or not it is “dishonest” to go behind the agents back to save money, because “obv getting it less is optimal”. Oh and the agent that found the property in “is also a family friend”. This person wanted other peoples opinion on the situation because "I feel guilty and dishonest going behind the agent who discovered it" The screenshots continued and I was happy to read that most people understand common sense. 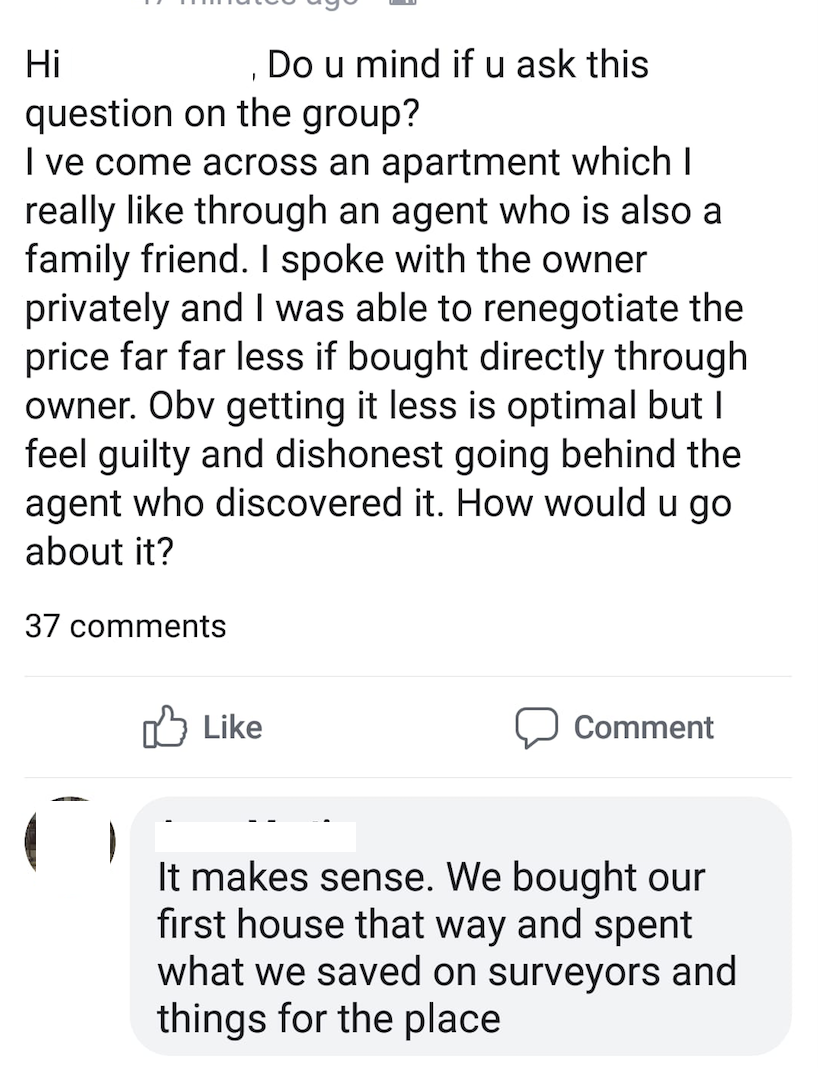 The service provided by an agent is an actual career. Agents also have loans to pay, families to feed and school fees to pay. Agents also want to save for their own place and go on holiday. Agents also have to pay their monthly phone bills, fuel and Melita subscription (yes product placement ad here) . People seem to think that agents are swimming in money cause of the “high fees they charge”. They are “putting up the prices” one said, just before we got called “modern day robbers”. It was very comforting to see so many people supporting us agents. On the other hand one actually gave the advice to “ahtafa”… go ahead, break the law. Screw your friend. Great advice. Agents work on a success rate. This means they only get paid if they close a deal. Yes that means at the end of the month, if they didn’t close any deals, they can’t pay their loans, feed their families bla bla bla…

So for those of you that have never tried to be an agent, this is what an agents’ work month looks like. Agents are trained to find bargains. Currently, it is a seller's market, there are more buyers than sellers, demand exceeds supply. In this current market, an agent spends hours upon hours on the phone, sifting through listings, newspapers, websites and referrals. After several hundreds of phone calls the agent picks about ninety every month to go and see. That's 3 per day, including weekends, in the sun or rain, in the traffic watching their fuel gauge go down, quicker in summer if they can afford the AC.

After speaking with the owners about the property and offering a valuation through their extensive training and experience some owners add on the service fee agencies charge. In this case, the property becomes overvalued. Agents advise against this in anticipation to negotiate it down to market value. Then the owner has the choice to either keep it overpriced, sell it without the agent's services or engage the agent's services to sell it as quickly as possible. This is completely up to the owner, agents only offer advice and service, payable only on the success of a sale. After seeing those ninety properties, an agent goes back to their office day in day out, starts sifting through plans, checking ground rents, asking colleagues for opinions, seeing what else is being advertised and so on. Then they typically choose about 5 to work on, as they know that these 5 are a bargain when compared to the rest of the research they did and the other 85 properties they saw. They proceed to create renders and payment terms for these 5 properties, only to find out that their competitors have already sold 3 of them. Now they are left with 2, one owner decides to put up the price at the last minute because their partner parents spoke to someone that said they can get more for that property, which they never saw, in that street they never went to. The other forgot to mention the ground rent.

A whole months work, no deal closed.  “I’ll eat into my savings this month to pay the bills, thank God I spent till 22:00 last week in a konvenju trying to convince the seller that my clients back loan has been recommended for approval, because I set that meeting personally myself too.” the agent says to themselves quietly on the drive home.  When home, looking at the calendar days they realise it's gonna be hard at the end of this month. Sighing, just before kissing their kids good night, trying to smile and stay motivated for the month ahead. Then the agent remembers “Shit I have to wait almost 18 months for that wage because it is on plan, and I get paid when it's completed. What am I going to do? What if that konvenju doesn't reach contract stage?"

Back on Facebook the discussion went on, with most people giving the right advice. Saying you shouldn’t engage a person to give you a service then try and avoid paying their fees. Who would have known right? I mean lets just engage a lawyer to defend us and after they win the case for us let’s tell them that it’s cheaper not to pay the invoice. I mean "I can buy a new kitchen instead." mhux hekk?

A few other clever people actually gave the prospective buyer the option to “cut out the company”. Amazing! Not only break the law again, but actually entice some one to be an accomplice and end up without a job. Well done. Thankfully the reply to this comment was similar to what I had in mind.

Then the famous “agents are over paid for such a job”. It was actually put in quite a hilarious manner. This person believes that its easy to be an agent “many many times the client gets in touch with an agency which they would have a list of properties… a client walks in and the agents shows the properties.. yeah, very hard job indeed… they get paid thousands… if ppl have to thousands of € to spare… well go ahead but it makes me realise that with the already expensive properties the agents commission is all thats needed.. if it was 2% maybe i would understand but 5-6% i think thats too much to ask”. Again, there replies were favourable to the agents. I mean it would be obvious that this “list of properties” doesn’t magically appear and update itself. Then the 5-6%, its 5 not 6, there is VAT on top of the 5, like any other service, a legal obligation to the government. Agent’s don’t keep the VAT, like ever other service provider in any other industry to company, this VAT is passed onto the VAT Department. Some people seem to think that an agent makes 10K in one day. They fail to see the life of an agent as I explained above, and they fail to understand that that 10K is split many ways. There is a listing agent who gets their cut, a manager in some cases a franchise and branch listing fee. The little left over is then used to pay for the companies salaries, tech updates, advertising, business development, designs, fairs and the endless list of office expenses.

The property industry is one of Malta’s largest industries. It is a client to many other industries and employs many hard working, passionate people. Not just on the field but even behind the desks. There are secretaries, accountants, C-level management, designers, marketing teams, maids, maintenance people, lawyers, architects, notaries and many more. We are part of an eco-system, a sustainable vibration that brings people together. We are proud of what we do, don’t let a handful of untrained or unethical agents tarnish an entire industry. Just find a reputable agent, do your research and build a relationship with them. Never forget, there is always a snake in paradise.

So to conclude I would like to thank all the people that supported human decency, respect and “irgulija” and of course the roles of Estate Agents in general. Then to our dear friend that asked for the post to be published I leave you with this:

The next time you get a blow dry post on FB “I’m at the hair dressing getting a blow dry, she’s a family friend. She’s almost finished and did a great job! I love the result, I don’t think anyone else could have done it as well as she did, unless I did it myself. Obv it would have been cheaper to do so, and getting thing less is optimal, but I feel guilty and dishonest just walking out now. I mean, she did do a great job and I love it. How would you go about it?” …

Most people online tell her its illegal to just get up and walk out. I mean she could even get arrested for that! Besides the embarrassment factor of course. In certain cases, people may decide to risk it and do it anyways as its only 15 Euro, and we all know people try it all the time. Does that feel right? That my dear friends is your "day light robbery"

Anonymous replies “Oh I’m sorry do I have to pay you for this service? I didn’t realise you have rent to pay, electricity bills, equipment to invest in, oh and a profit to make a living doing the thing you are passionate about. I was going to do my nails with this money.."

… PS. You had the choice to do it yourself from day 1, but you either didn’t manage or didn’t have the time, that's why you chose to go to an agent. Nobody forced you. Next time Freddy, use find it.