The best addresses to visit in Valletta in one day

Valletta, is the tiny capital of Malta, was built by Jean Parisot of Valletta in the 15th century, a Grand Master of the Knights of St John, a roman catholic order. This fortified city is known for its museums, cathedrals, palaces and its beautiful architecture.

In 2012, the foundation Valetta was designated as the European capital of Culture 2018! Valletta become the European capital of culture in 2018 with also the city of Leeuwarden in Netherlands.
To help you in your visits, we have found the best addresses to spend a pleasant time in our beautiful capital!
To access Valleta fast and in a flamboyant tourist style, you can take the ferry for 5 minutes (around € 1.50 for one-way) from Sliema and see the capital from the sea. You must walk for 5 minutes to access the center of the city (do not expect stiletto heels, it rises strongly) gold for less sports, bus services for €1 allow you to climb to the top of the city directly!
However, it's also possible to take the bus as a form of transportation the Malta Public Bus can take you to most if not all areas of Malta (around € 1.50 for one ticket, that last 2 hours). This makes find a bus that can drop your directly next to Triton fountain (the entrance of Valletta) is easily accessible. It is very pleasant, after taking some pictures, to sit on the benches around the fountain to enjoy the Maltese sun.

Now you're ready to visit!

To start the day, St. John's Co-Cathedral is one place worth visiting in Valletta. Built by the Order of the Knights Hospitaller of St John in 15th century (1573-1577), this masterpiece of baroque art has a simple facade goal once inside... it's amazing!
The floor consisting of marbled slabs decorated with coat of arms, the co-cathedral houses the tombs of the Knights of the Order. The vault, meanwhile, is entirely covered with frescoes depicting the life of St. John the Baptist. Every pillar and walls are covered in gold!
This cathedral is highly prized, so it is advisable to visit early in the day. Affordable rates (preferential rates on presentation of proof) and audio guide available and advised to know more.

For rates and schedules, it is better to visit the opposite website: https://www.stjohnscocathedral.com 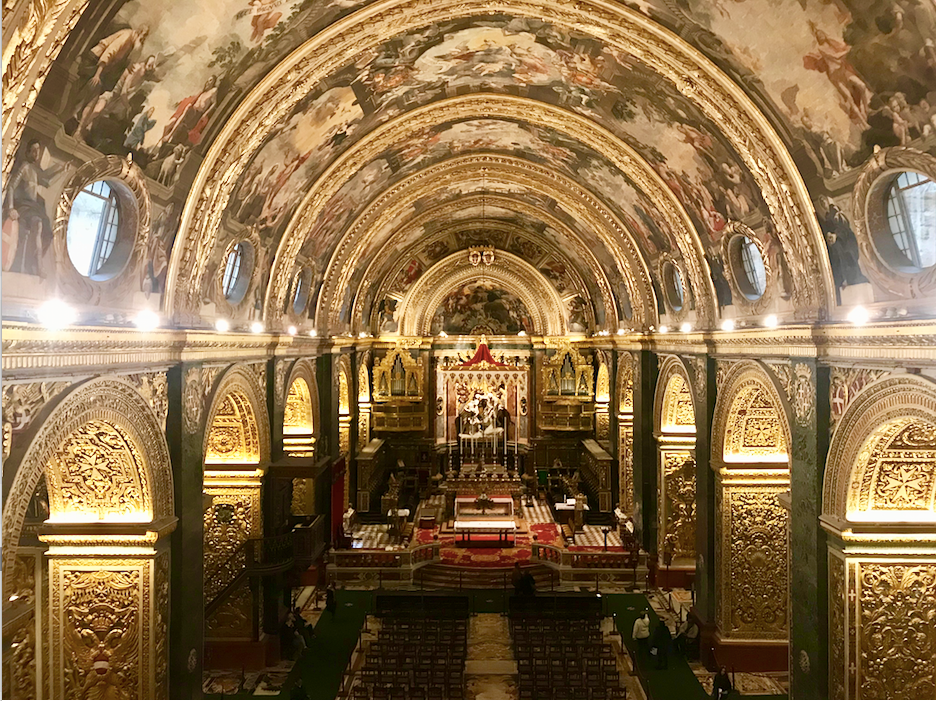 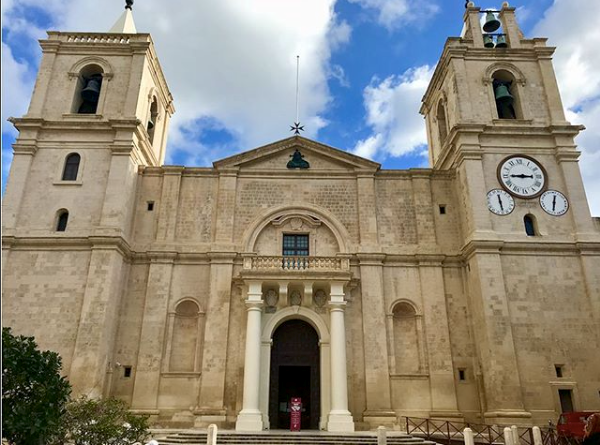 The next location after this visit, is the Hotel Grandmaster (Maltese: it-Palazz tal-Granmastru), officially known as The Palace (Maltese: it-Palazz), located behind St. John's Cathedral. It was built between the 16th and 18th centuries as the palace of the Grand Master of the Order of Saints.

It eventually became the Governor's Palace and nowadays it currently houses the Office of the President of Malta. The Palace State Rooms and the Palace Armoury is open to the public and can be visited all year round. Impressive museum with more than 5000 amurs.

The fare costs €10 for about 2 hours of visit. (preferential rates on presentation of proof). 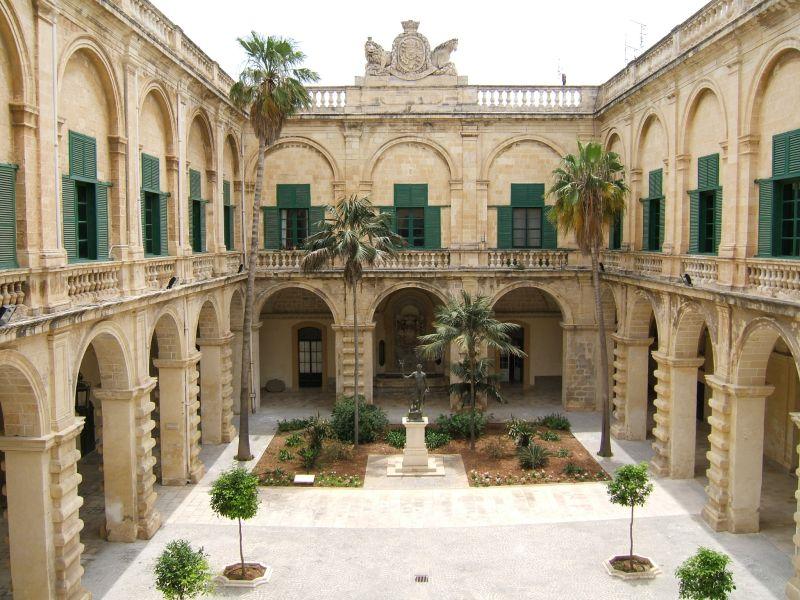 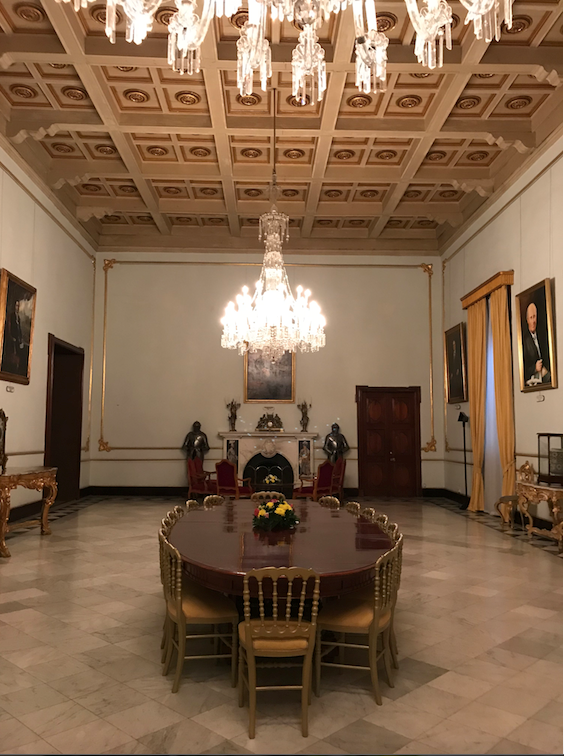 Before leaving to eat, you can go quick but beautiful exploration in the Upper Barrakka Gardens & Lower Barraka Gardens!

Located in the heart of the Valleta, the Upper Barraka Garden year offering unobstructed view of Three cities (The Three Cities is a collective description of the three fortified cities of Birgu, Senglea and Cospicua). As far as the eye can see the yacht stay mostly at the port.

Every day in the afternoon, the Upper Barrakka Gardens (below columns and benches) is punctuated by cannon shots (everything is under control, obviously!). Formerly used to greet foreign ships, the guns have been restored to bring some folklore to your day of visits. Attraction completed by people in period costumes trained in the use of guns.

Lower Barraka Gardens is a little lower (necessarily) than the other, it is also smaller. In this garden, you can find the small Dorian temple dedicated to Alexander Ball, the gentleman who directed the Maltese against the French.

We can also see the seat Bell War Memorial , often simply called "The Bell", this monument is very photogenic, with the backdrop of the sea and the Three Cities.

These two gardens can be visited for free and all year long. This is a relaxing location excellent place where you can be free while drinking some fresh fruit juice while contemplating the breathtaking views all around you. 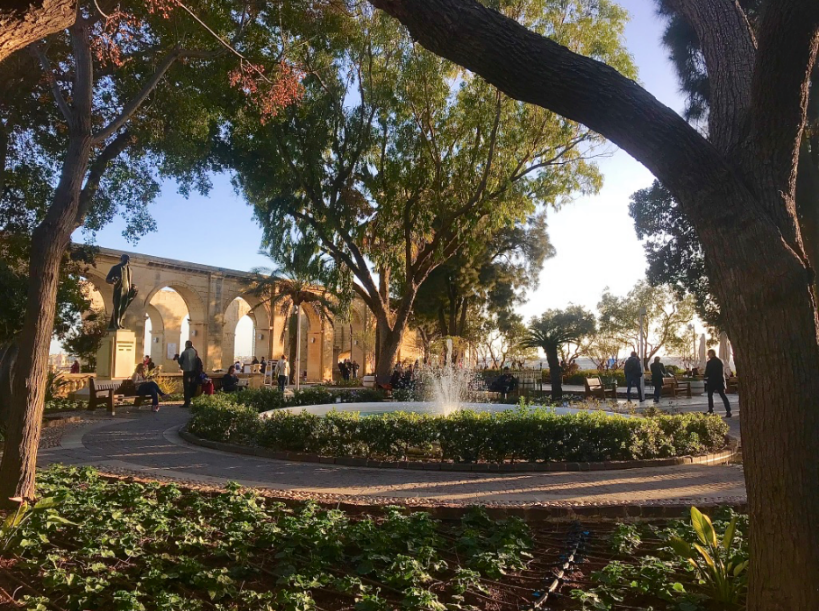 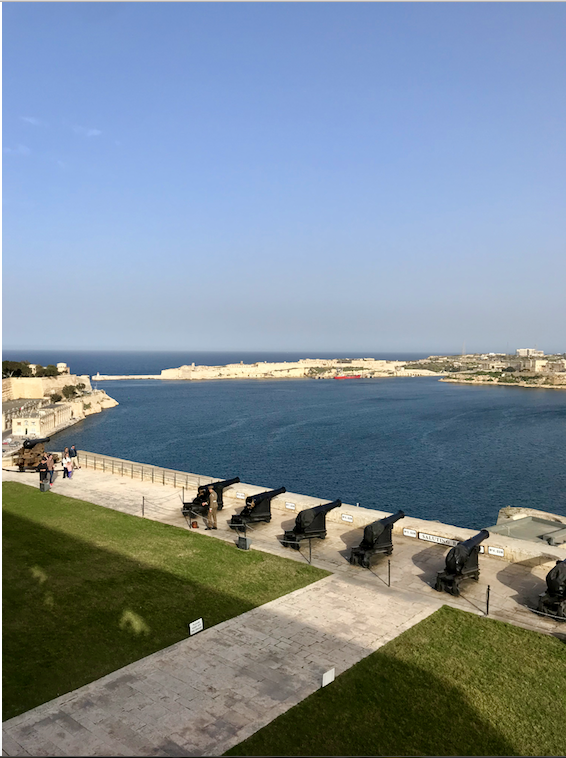 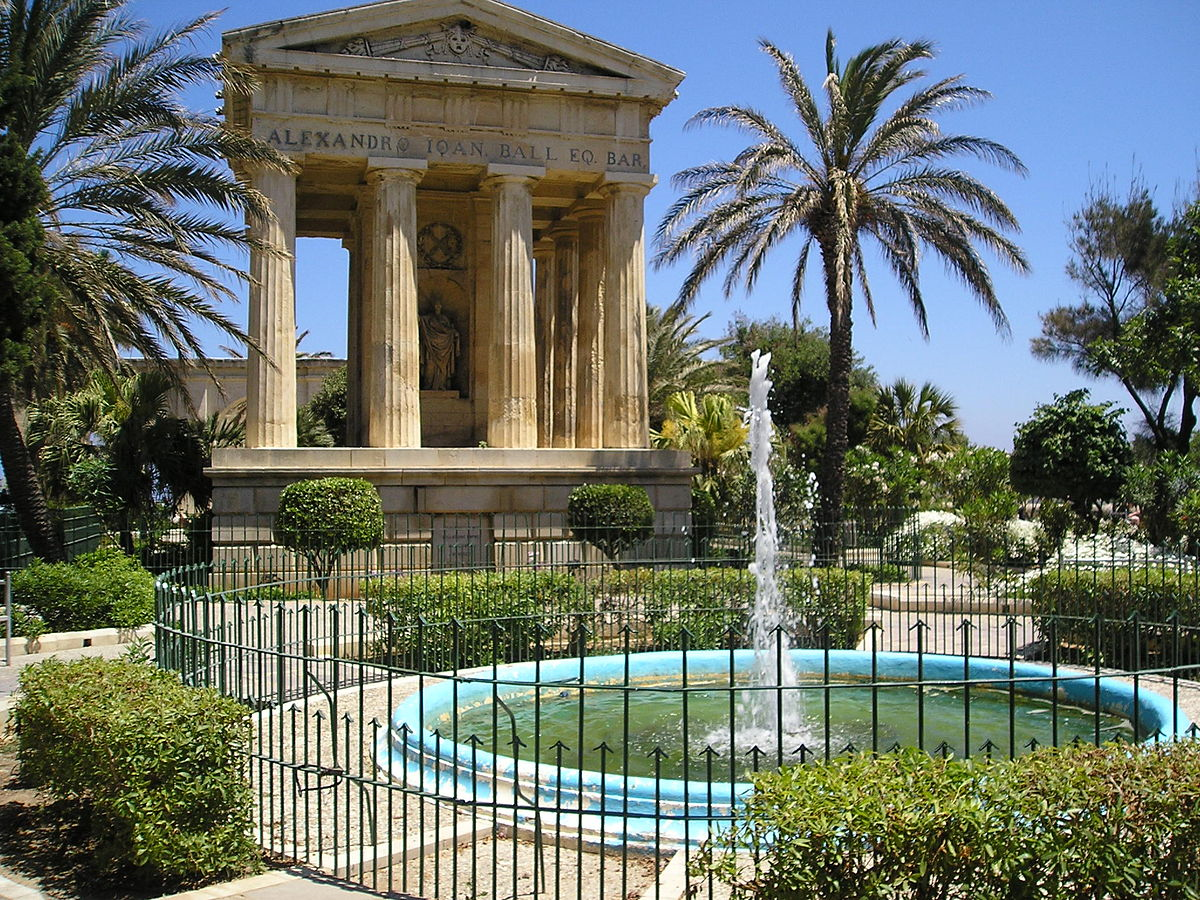 After visiting all of these, you can stroll the main street of the capital: Republic and Merchant Street. These two main streets are composed of many cafes, restaurants and commonly popular stores! In Republic Street, you can discover the parliament and lots of European high-end shops like Tommy Hilfiger or the famous glacier Haagen Dazs (also not to be missed!)

To eat, you can find many restaurants like the cafe Cordina! This restaurant has a nice outdoor terrace with a view of the beautiful bibliotheca of Valetta but also year interior reminiscent of traditional British coffees! 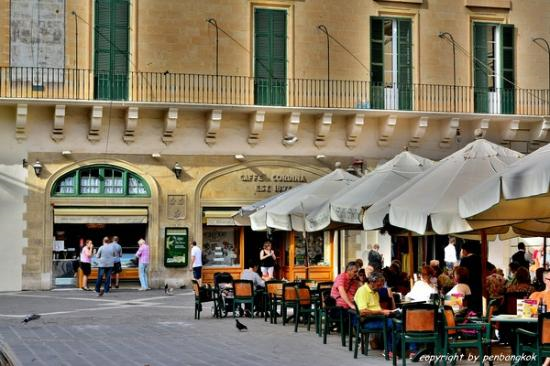 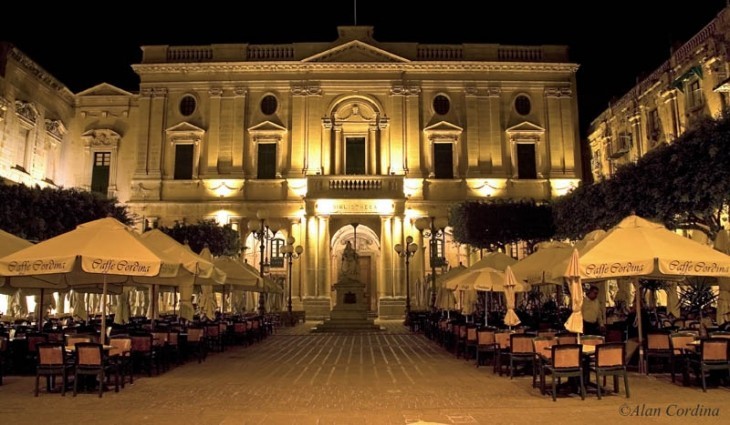 After having been able to eat and enjoy the sun on the terrace, go to Fort St Elmo and National War Museum!

Fort Saint-Elmo was built in 1552 by the knights to protect the two ports of Valletta. It was the key element of a tragic episode of the island of Malta named the "Great Siege". This fort was bombed and destroyed by the Turks, all the Maltese knights who were there was killed. During the second world war, this fort allowed the safety of the Maltese.

This place of memory is a highly appreciated by the Maltese by its history building. You can find in the fort, museum of war, the relatively broad museum, which summarizes the history of the war in Malta (the essential and big event dates) explain by small animations very easy to understand.

This museum allows to know the hand events that marked this island.

Do not miss it: the breathtaking view of Sliema from the fort! 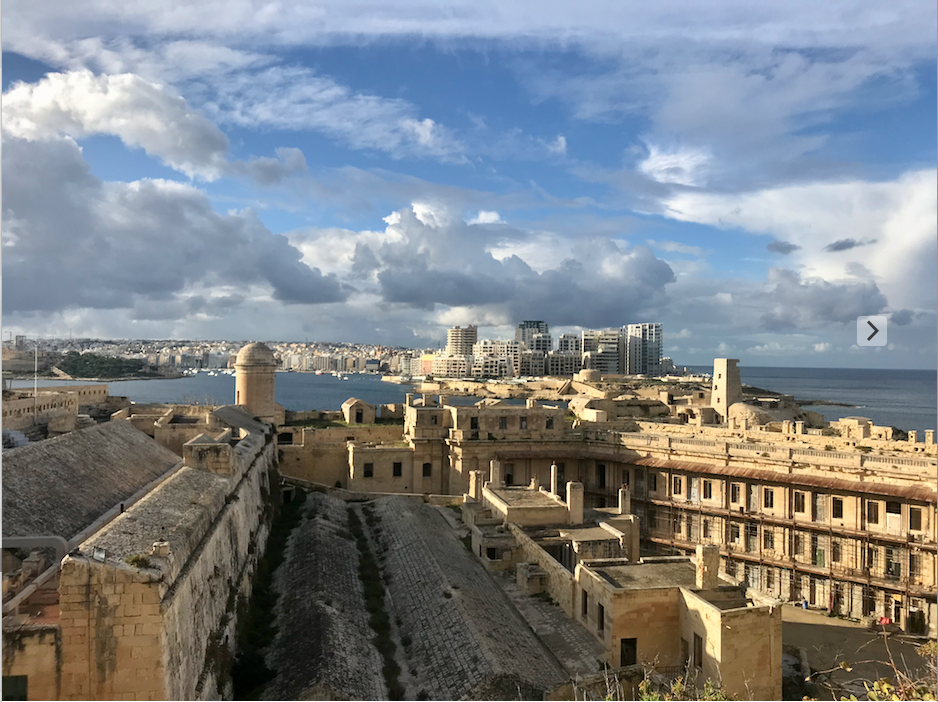 Here you have achieved a full round of capital in one day!

If you have more time, don't hesitate to visit more beautiful places in Valletta such as:

Malta is full of fabulous places, apart from the capital, which must not be forgotten!

If you stay a few more days, you will have the chance to visit all the Maltese archipelago!