The Malta Individual Investor Programme (‘MIIP’): An opportunity to invest!

The Maltese archipelago lies virtually at the centre of the Mediterranean, 93 km south of Sicily and 288 km north of Africa. The archipelago consists of three islands: Malta, Gozo and Comino with a total population of over 400,000 inhabitants occupying an area of 316 square kilometers.

Malta is the largest island and the cultural, commercial and administrative centre. Gozo is the second largest island and is more rural, characterised by fishing, tourism, crafts and agriculture. Comino, the smallest of the trio, has one hotel and is largely uninhabited.

Malta has been a member of the European Union since 2004, part of Schengen since 2007 and its currency is the Euro. Malta has one of Europe’s fastest growing economies and has over the years become a major financial services centre and maritime hub.

The Malta Individual Investor Programme (‘MIIP’), introduced by way of Legal Notice 47 of 2014, allows for the grant of Malta citizenship, further to the completion of a due diligence process, by a certificate of naturalisation to foreign individuals and their families, who contribute to the economic development of Malta. Further to the granting of a Certificate of Naturalisation an individual may apply for a Malta passport.

The MIIP which offers a ‘second citizenship’ option, is a Programme which has been approved by the European Union (‘EU’), provides beneficiaries with the EU fundamental freedoms, grants VISA free travel within the Schengen Area and allows beneficiaries to reside indefinitely in Malta. The benefits of the MIIP are also passed on to future generations as individuals born of Maltese Citizens are also granted Malta citizenship.

The qualifications and general requirements for a person to be a ‘Main Applicant[1]’ for citizenship under the MIIP shall be that such person:

- Provide evidence of residence in Malta for at least twelve months prior to the issue of a Certificate of Naturalisation.

- Effect a contribution to the Malta National Development and Social Fund Make a purchase of    € 150,000 of Malta Government Bonds. Such investment is to be held for a minimum period of 5 years, following the granting of a Certificate of Naturalisation.

- Purchase/lease immovable property for a minimum amount of € 350,000 or € 16,000 per annum respectively.  Such property is to be held for a minimum period of 5 years, following the granting of a Certificate of Naturalisation.

- Obtain coverage (together with all applicable dependents) by a global health insurance policy with a minimum worldwide coverage of € 50,000 per individual per year.

It is important to note that the above-mentioned contribution and investment in Malta Government Bonds, is only required to be made after receiving a Letter of Approval from Identity Malta (IMA), which is the Regulator of the MIIP.

Furthermore, the Main Applicant and each adult dependent must:

- Not have been involved in any criminal activity including offences that disturb the good order of the family or be on any criminal list. Police certificates issued by the Malta police as well as police certificates in the country of origin and in any jurisdiction where the Main Applicant and/or his dependents have resided for more than 6 months during the last 10 years will be required to be presented as part of the application.

- Not be a potential threat to Malta’s national security, public policy or health.

- Never been denied a VISA to a country with which Malta has VISA free travel arrangements, unless a VISA to that country was obtained at a later stage.

MIIP – Individuals who qualify as dependants of the Main Applicant

The following dependants may apply as part of a Main Applicant’s application:

- The spouse of the main applicant in a monogamous marriage or in another relationship having the same or a similar status to marriage, unless the Minister authorises otherwise on a case by case basis.

- A child, including an adopted child, of the main applicant or of his spouse who is less than eighteen years of age.

- A child of the main applicant or of his spouse who is between the age of eighteen and twenty-six years and who is not married and who proves, to the satisfaction of the Minister, that he is wholly maintained by the main applicant.

- Meetings with Vesta Globals immigration team, during which an outline of the whole process will be presented to the Main Applicant.

- An initial meeting will be held with Identity Malta, during which the Malta Residence Permit application will be submitted to Identity Malta (together with first non-refundable payment of  € 5,000).

- Introductory meetings with banks and social clubs will also be held to initiate ‘links’ with Malta.

Applicant need not be in Malta during Phase II

- MIIP application forms submitted to Identity Malta (together with second non-refundable payment of € 5,000) by Vesta Global immigration’s team on behalf of Main Applicant.

- Due diligence fees, bank charges and passport fees should also be paid at this stage.

- Within 90 days from Phase II IMA shall verify that the application has been certified as formally correct and that all relevant information provided has been verified by one or more independent due diligence agents.

- Letter of Approval in Principal is issued by IMA, subject to the satisfactory completion of the due diligence process.

- Main applicant and dependants take Oath of Allegiance in Malta 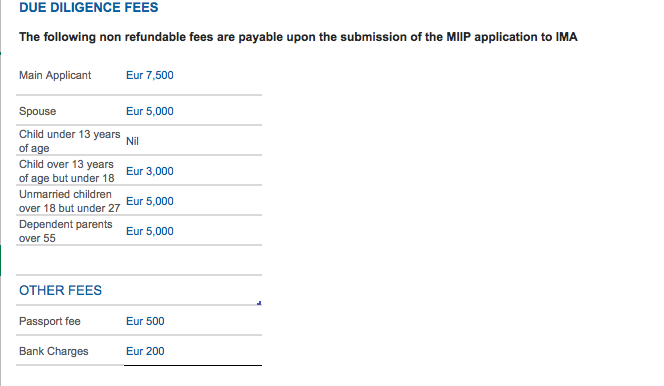 [1] "main applicant" means the person who, either as a single applicant or as the head of a family, undertakes to make a contribution for the purposes of these regulations and signs the relevant agreements and undertakings on behalf of his dependants;

[2] Citizenship is only granted after 1 year of being resident in Malta.